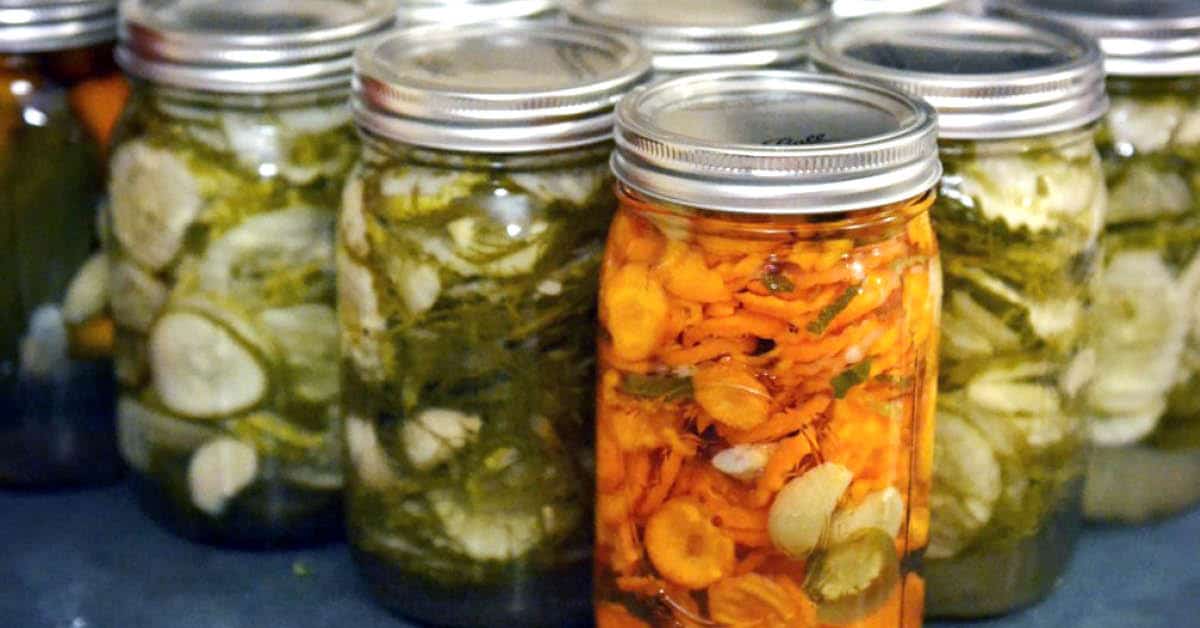 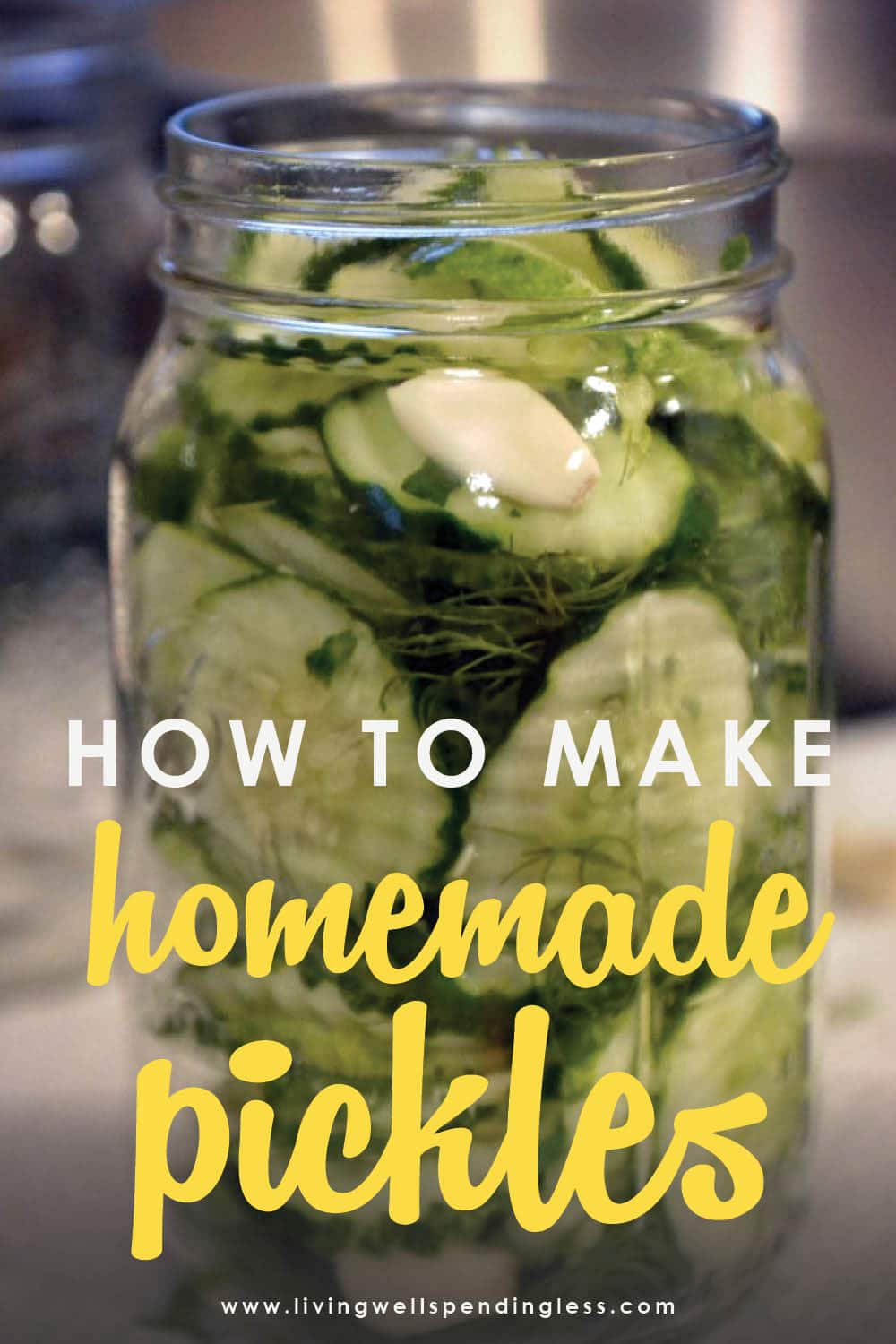 Looking to make homemade pickles? This awesome step-by-step tutorial is SO easy to follow, even if you’ve never made them before!

When I was pregnant with my younger daughter Annie, my best friend Alysha gave me a basket of homemade goodies for Christmas, including a jar of pickles she had canned herself. It was all good, but those pickles were the best thing I had ever tasted and I ate the entire jar in one sitting. I couldn’t stop. And then I asked for another jar. And another. And thus began a lifelong (well, okay, 3 year) obsession with homemade pickles.

Since then I have begged, pleaded, & even cried to her and all my other pickle-making friends for more pickles. I have to avoid farmer’s markets because if I see them for sale, I am compelled to pay $6 a jar, and while normal people may stop at one jar, I will buy as many jars as I have cash in my wallet.

And I know what you’re thinking:  Why not just learn how to make your own homemade pickles?

I’ll tell you why. It’s because of this man right here. This mean, mean, horrible man: 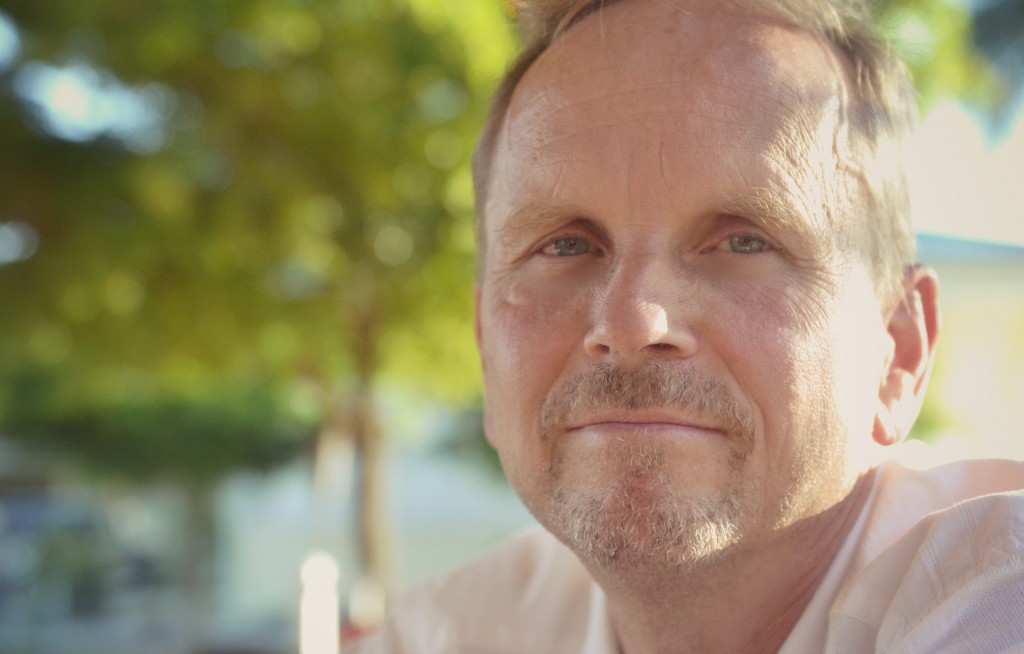 He was afraid I would poison us. Also, knowing my tendency to lean towards overdoing, well, everything, he was also afraid I would go completely overboard and fill our house with 5,000 mason jars, pressure cookers, lids, utensils, cookbooks, and all the other canning “essentials.”

So he said no, absolutely not.

Even when friends gave me pickling books for Christmas and my birthday, he said no.

Even as, through the years, I collected my very own little collection of mason jars and rings, refusing to throw away even a single one, he said no.

Until one day I met this girl: 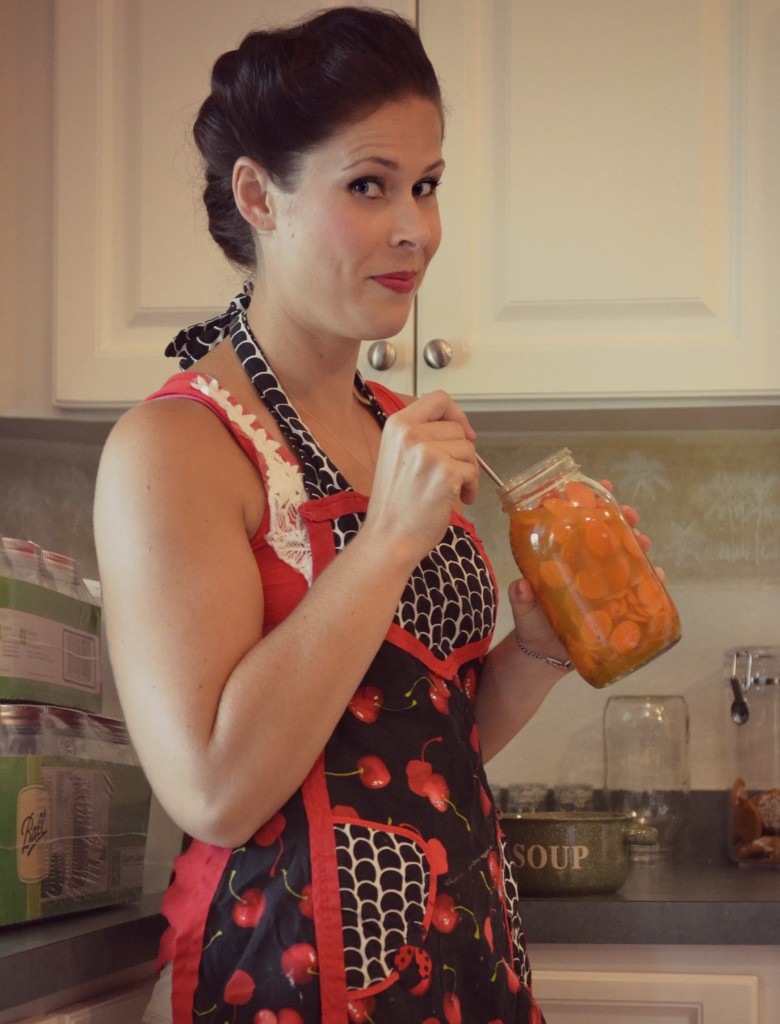 McKenzie was tragically born about 7 decades too late, but the girl can pickle & can like nobody’s business. And when she heard my sad story she took it upon herself to throw a pickling extravaganza–complete with chocolate martinis– with the sole purpose of teaching me, once and for all, how to make homemade pickles. 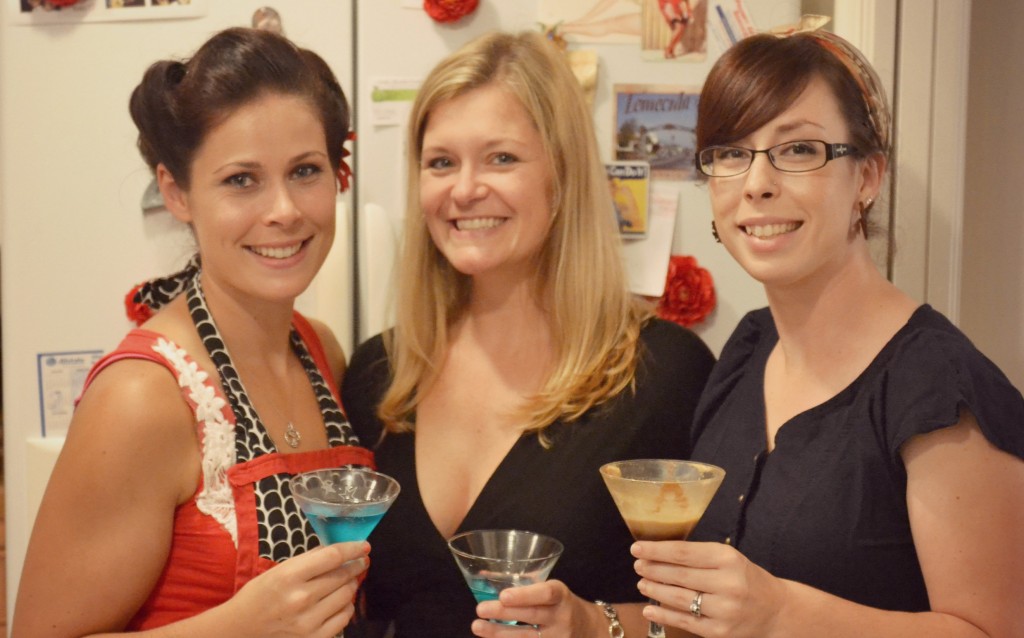 Before I go any further,  let me just say….Best. Night. Ever. Pickles rock my world!

And who knew they were SO easy? 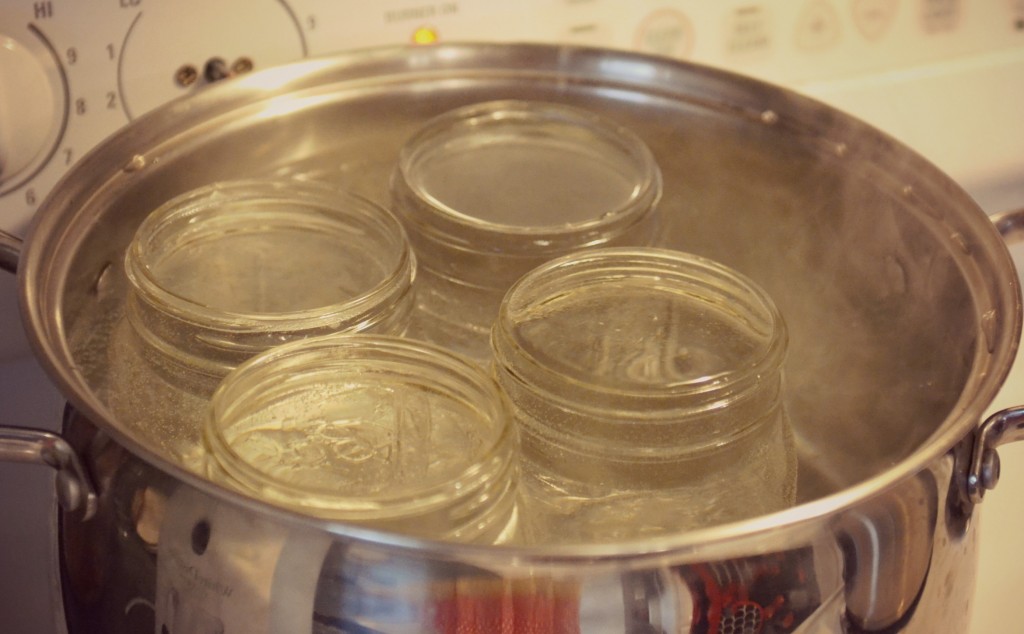 1.Sterilize your jars & lids.  Heat a big pot of boiling water, then carefully lower your jars into the water using a jar lifter. Let them boil for at least 5 minutes, then lift them out and place them on a clean dry towel. After the jars have been sterilized, place the jar lids in the boiling water to sterilize them as well.

2.Prepare your vegetables.  Slice your cucumbers & carrots, chop your cauliflower, or prep whichever other vegetables you plan to pickle. If you plan to make a lot of sliced pickles (or other sliced vegetables), a salad shooter is definitely a worthwhile investment–so easy and fun to use! Be sure to peel lots of garlic too.

3. In a separate pot, boil your vinegar mixture. Mix 2 cups water with 2 cups vinegar and 1/4 cup salt. (You can double or triple this if necessary.) 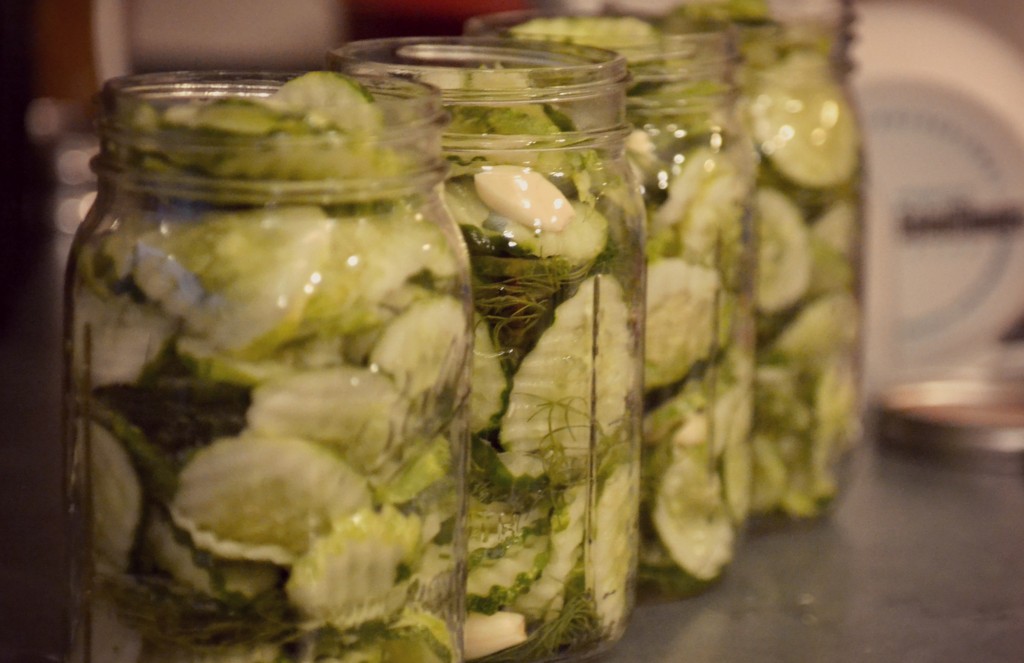 4. Fill your jars.  For basic dill pickles, just pack cucumbers into the jar with a few springs of dill and garlic cloves. Pack them in as tight as you can, but try not to touch the inside of the jar.

For sweet pickles or other variations, it helps to have a pickling or canning cookbook, but you can just experiment if you prefer. You can pickle other vegetables too–we did a few jars of jalepenos, peppers, radishes, cauliflower, & hot carrots (with jalepenos) in addition to the cucumbers. 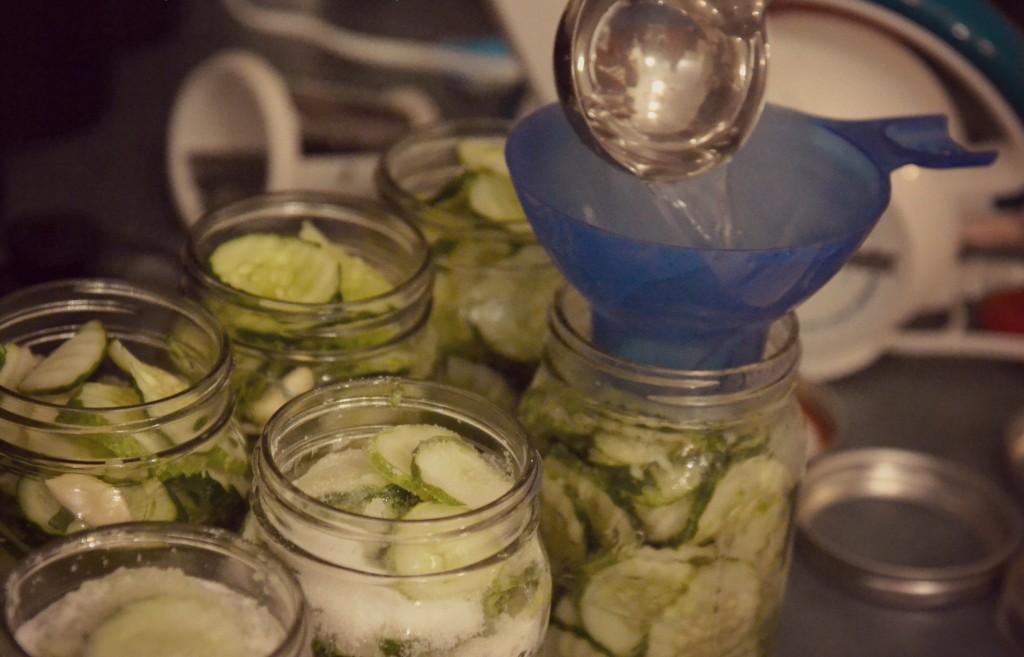 5. Place funnel over jar and carefully ladle vinegar mixture over pickles until full. Retrieve a lid from the boiling water using a magnetized grabber, then carefully place it on the jar and screw ring on to hold it in place. Repeat until all jars are filled.

7. Use jar lifter to place filled jars back in boiling water. Boil for 10 minutes, then remove and let cool. 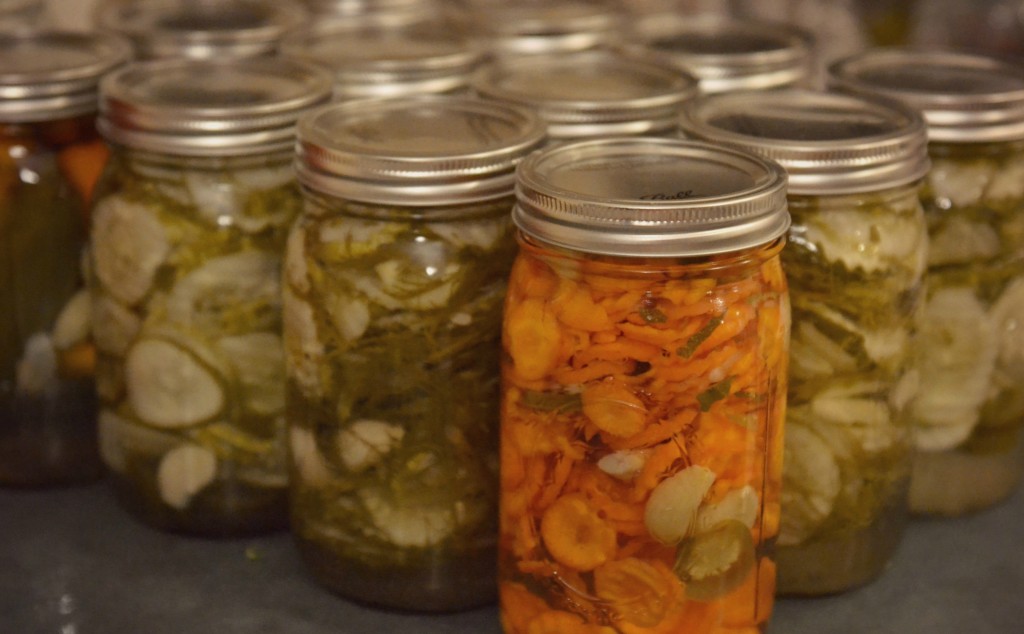 8. Wait for the lids to pop as they cool.  Once they’ve popped, you know they are sealed. When you tap the tops of the lids you will be able to hear the difference between the sealed lids (a dull sound) and the unsealed lids (more of a tinny sound.)  Wait 30 days for your pickles to ferment. (This is the hardest part!) If, for some reason, you don’t hear a pop when you open them then don’t eat them! 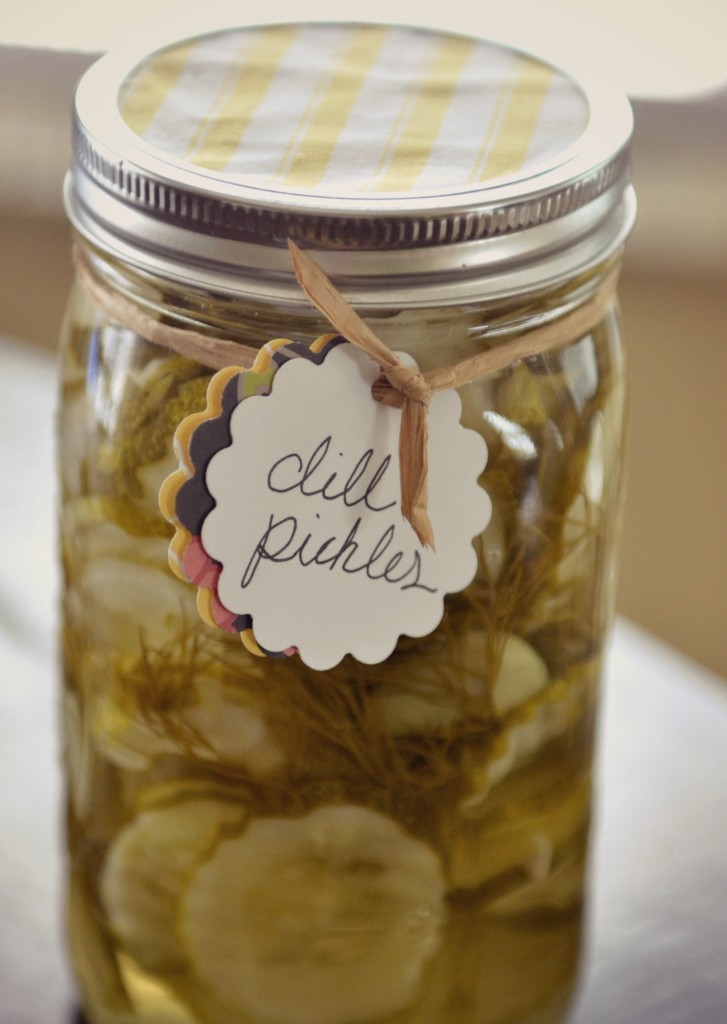 Can you believe how easy that is? And they make such cute gifts–I am pretty sure that everyone I know will be getting pickles for Christmas this year! What about you–have you ever made homemade pickles or done your own canning? If so, do you have a favorite recipe or special tricks? 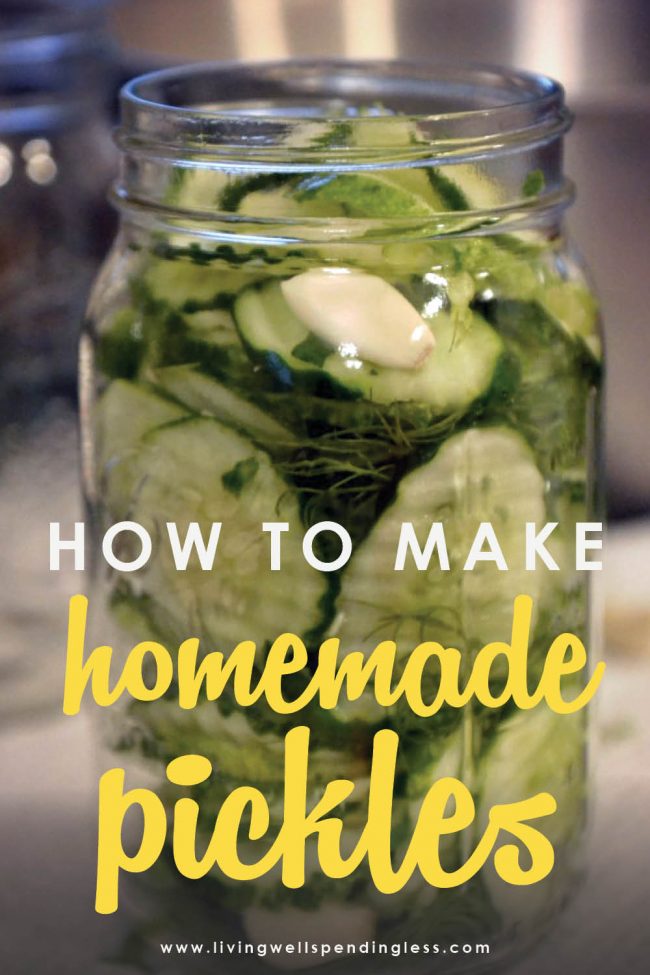 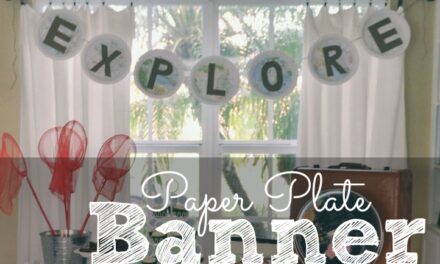 How to Make a Paper Plate Banner 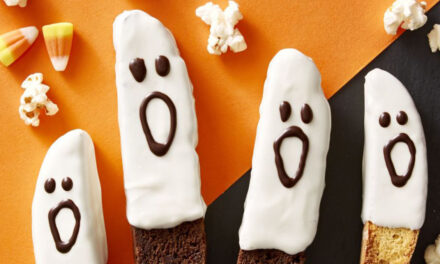 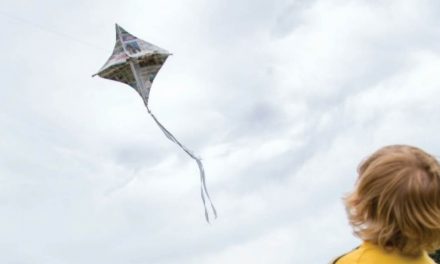 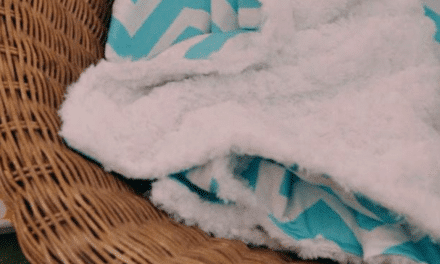